Polio re-emergence in the EU can be prevented, concludes ECDC assessment.

The recent detection of wild-type polio virus 1 (WPV1) in sewage and asymptomatic carriers in Israel raises new questions on the potential for the importation and re-establishment of WPV in EU/EEA countries.

In the new rapid risk assessment, ECDC concludes that there is the possibility that poliovirus may be imported and re-established in the EU/EEA.

Furthermore, based on the limited information on existing surveillance systems, there is a risk that poliovirus circulation will go undetected if it is imported.

Polio vaccine reminder for travellers to Israel, the West Bank and Gaza.

Public Health England and National Travel Health Network and Centre (NaTHNaC) remind UK residents to make sure they are up-to-date with routine immunisations.
Travellers to Israel, or the West Bank and Gaza in Palestine, should also make sure they have had a polio containing vaccine in the past 10 years.

PERU - The seven families of the children who contracted polio after being vaccinated in Ministry of Health (MINSA) hospitals between 2003 and this year, accepted an offer of S/. 994.420 as compensation for the harm caused to the minors.

Last child infected with polio lost his battle with the disease over the weekend.

The seven families of the children who contracted polio after being vaccinated in Ministry of Health (MINSA) hospitals between 2003 and this year, accepted an offer of S/. 994.420 as compensation for the harm caused to the minors, El Comercio reported.

According to El Comercio, Mario Rios, lawyer for the families, says that Minsa sent letters to the parents of seven children on July 23 making it clear that the almost one million soles for damages was the final offer that the ministry was willing to give. This came after the families had refused an offer made in June that was around S/.300.000. 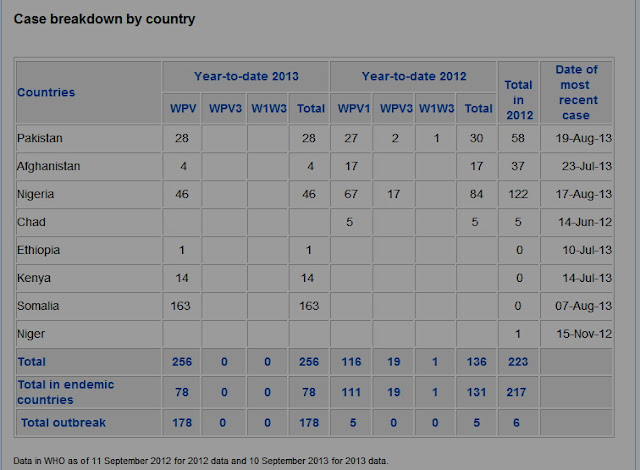 When she was 20, Stephanie Lipscomb started experiencing the blinding headaches. Doctors initially diagnosed her with a sinus infection and sent her home with antibiotics. When that didn’t work, they diagnosed her with migraines and gave her caffeine pills. But the headaches got more severe.

“I couldn’t bathe myself, dress myself,” Lipscomb says. “All I could do was just lay there in pain.”

When she lost 15 pounds, she finally checked herself into the emergency room. After an MRI, doctors found a mass the size of a tennis ball. They operated almost immediately. A biopsy of the tumor confirmed everyone’s worst fears: it was malignant. Pakistan - An official at the Chief Minister’s Polio Monitoring Cell said the stool of Hijab from Jarma union council tested positive for wild polio virus (WPV1) according to the National Institute of Health (NIH) in Islamabad.

Kohat reports first polio case of the year.
PESHAWAR.-Polio virus was confirmed in a 10-month-old girl from Kohat on Thursday, in what is the district’s first case of the year.
An official at the Chief Minister’s Polio Monitoring Cell said the stool of Hijab from Jarma union council tested positive for wild polio virus (WPV1) according to the National Institute of Health (NIH) in Islamabad.

Aboard the Jibon Tari (Boat of Life) Floating Hospital, patients are treated for a range of conditions including cataracts, club-foot, post-polio deformities, cleft lip and loss of hearing.

There have been 27 confirmed polio cases in Pakistan so far this year.

Syed Wali desperately wants to immunize his three young children against polio but fears the Islamic militants who banned the vaccine from this remote area in northwest Pakistan will catch him if he tries to smuggle it in.

"I can afford to bring the vaccine for my children, but what answer will I give the Taliban if they recover the vaccine bag from my possession?" Wali asked.

Wali's fears are shared by many in the North Waziristan tribal area as health authorities recently confirmed five new polio cases there and suspect there are many more. It's one of a series of outbreaks this year in parts of the country where security threats have kept out vaccination teams.

There's concern that the virus circulating in Israel may spill out of the country, says Emory University's.

Israel is in the midst of a massive, emergency immunization drive of all children under the age of 9 against polio.

Health workers detected the virus in southern Israel in February. Since then, they've found it in 85 different sewage samples across the country, the said Wednesday. Yet so far, no children have gotten sick or been paralyzed by the virus.

Israel has one of the highest rates of immunization coverage in the world, says Chris Maher of the World Health Organization. And that's one reason why the country has avoided polio cases, so far. But health officials are still very concerned about the situation.

The vaccination campaign aims to give polio boosters to a million children.

"There's no way that 100 percent of the population can be immune at any given time," Maher says. "So any time that virus is circulating [in the environment], if there's a person who's not immune, there's a risk that that person is going to get clinical polio. They're going to get infected, and they're going to get sick."